Faculty and students rally to save San Francisco City College 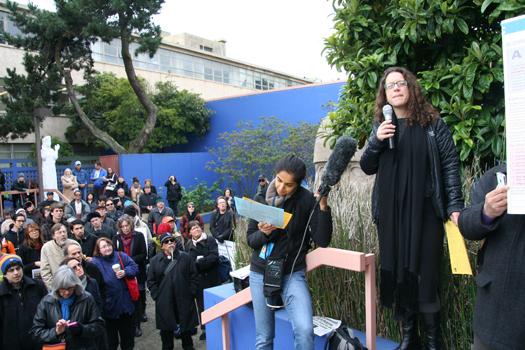 Alisa Messer, president of AFT Local 2121 at City College of San Francisco, speaks to a crowd of several hundred faculty and students outside Diego Rivera Theater. The rally was held at the same time as the interim chancellor was delivering her remarks on Flex Day to a nearly empty auditorium.

Despite the mandate from San Francisco voters on behalf of City College last November, when 73 percent voted for a parcel tax to shore up the college’s finances after years of state budget cuts, the interim chancellor has worked with a state-appointed trustee to sequester the funds, creating an artificial fiscal emergency, and imposing pay cuts and layoffs for faculty and staff, and fewer classes for City College students.