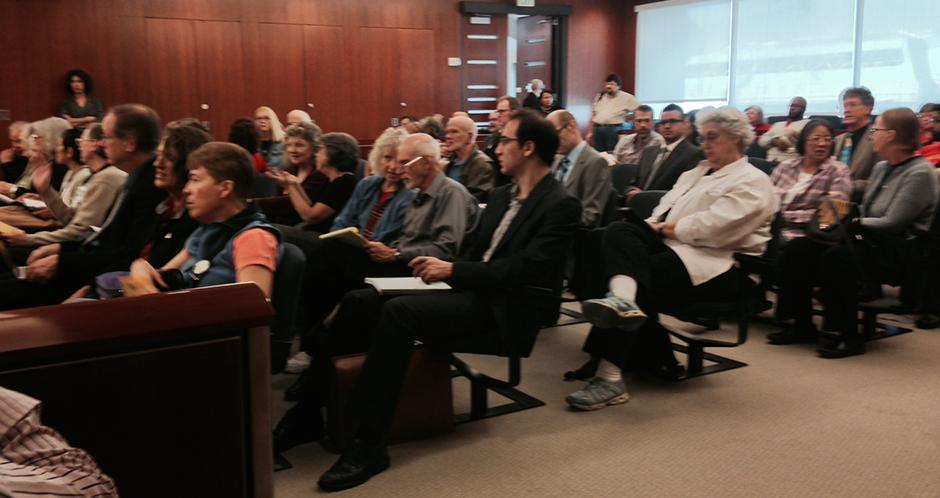 September 30, 2014—Over the past two years AFT Local 2121, representing faculty at City College of San Francisco (CCSF), and the California Federation of Teachers, representing 25,000 community college faculty around the state, have been embroiled in a life and death battle to save CCSF from disaccreditation at the hands of the Accrediting Commission for Community and Junior Colleges (ACCJC).

The expensive and exhausting effort has taken place in the courts, the legislature, the state budget process, at the bargaining table, in the news, and in the streets.

In early June at its biannual meeting in Sacramento the Commission refused to revisit its 2013 decision to close the college. Outside the meeting hundreds of faculty and students from across the state wearing “Yellow and Red for Public Ed” lined J Street with signs calling for a reversal of the disaccreditation decision and for fair accreditation practices. The ACCJC did its best to ignore that demonstration, but over the summer, new developments have given hope that the college will stay open, and the ACCJC will be prevented from carrying out its ideological vendetta.

On June 26 the California State Auditor issued a stinging critique of the ACCJC in its Report on California Community College Accreditation. It confirmed numerous problems with ACCJC’s operations first noted by the CFT in its complaint to the U.S. Department of Education in spring 2013, and validated by the USDOE that August. The auditor found that the ACCJC:

The auditor also noted numerous incorrect public statements by Commission members regarding its own policies. The report stayed away from many of the issues surrounding the Commission’s improper and illegal sanctions of City College of San Francisco, due to the pending lawsuit filed by the City Attorney of San Francisco against the Commission, scheduled to go to trial October 27, 2014.

The auditor’s finding was widely reported, including the first news story the Sacramento Bee had printed on the whole sorry saga. Shortly thereafter the Bee’s editor agreed to print an op-ed by CFT President Joshua Pechthalt urging the governor and Legislature to take action to rein in the rogue agency.

The news and editorial coverage represented a turnaround from 18 months before, not just in the Bee, but throughout California. Perhaps following the folk wisdom “Where there’s smoke there’s fire,” most reporting on what was happening to City College of San Francisco for the first year gave the benefit of the doubt to the ACCJC’s interpretation of the college’s struggles. This changed in August 2013 when in rapid succession, the USDOE sent its letter to the commission, CFT and the San Francisco City Attorney filed suit, and the auditor agreed to look into the ACCJC’s practices.

Emerging from the smoke blown by the Commission, the cause of keeping City College open was joined by local, state and federal elected officials. Previously compliant community college CEOs asked the commission to restore accreditation. The state community college chancellor, a former ACCJC ally, agreed to be deposed for the trial, revealing that he had been double-crossed by the commission’s president when he imposed a “supertrustee” on the college with the expectation that the commission would then back off from disaccreditation.

These events unfolded as several bills made their way through the state Legislature. The governor has signed two of them.

AB 1942 (Bonta, D-Oakland) mandates more transparency and accountability from the ACCJC by requiring biannual reports of policy changes and other specific reporting to the Legislature. Said CFT President Pechthalt, “It is a step in the right direction for more transparency in the notoriously secretive agency, and signals that previously hands-off legislators understand that they need to monitor the commission more closely.”

And AB 2087 (Ammiano, D-San Francisco) requires the state Community College Board of Governors to include benchmarks for restoration of an elected local college district board of trustees if it is replaced by a “special trustee,” as occurred in San Francisco. It also requires the “special trustee” to consult meaningfully with the college district in decision-making, instead of simply issuing decisions by fiat.

Another bill, carried by state Sen. Mark Leno, sought funding to restore millions of dollars in revenue to CCSF lost due to student fears the college was closing and consequent plunging enrollment. (Little-known fact: The college had actually achieved a balanced budget by June 2013, but then suffered terrible financial losses after ACCJC issued its closure order.) The funding was successfully folded into the state budget after intense lobbying.

On September 19, Superior Court Judge Curtis Karnow — whose January 2014 injunction against the ACCJC is keeping CCSF open — rejected the ACCJC’s arguments for dismissal of the case brought by San Francisco City Attorney Dennis Herrera against it, and granted summary adjudication on one key issue argued by Herrera.

In a hearing on September 10 in front of a courtroom filled with CCSF faculty and students, the ACCJC argued the agency could not be tried under California law because it was not a business. Judge Karnow found that in fact the Commission is a business governed by California’s Unfair Competition law.

In a good sign for a fair trial, Karnow also ruled that the ACCJC “violated controlling federal regulations” when it staffed a 2013 CCSF evaluation panel with just one academic among nine reviewers. Crucially, Karnow also said in his ruling that if the evidence at trial is sufficient, the law recognizes that the court may issue injunctive relief that restores City College’s accreditation.

Two weeks prior to the summary adjudication hearing, a revelation embarrassing to the ACCJC came to light. A Los Angeles Times story revealed that the commission had admitted in a court filing that its 2012 CCSF site evaluation team had unanimously (15–0) recommended probation for City College of San Francisco, not the harsher and unprecedented “show cause” status later imposed by the commission.

This meant that if the black box decision-making of the Commission had taken place in public, everyone would have known the ACCJC was overruling its own team’s unanimous recommendation for the lesser sanction, and it would have proven far more difficult for the agency to have forced its closure order on the college.

The accreditation battle at City College of San Francisco pits faculty against a supposedly neutral accrediting commission that is led, in fact, by anti-union ideologues, who viewed the crisis at CCSF created by the combination of the Great Recession and a revolving door of top administrators as an opportunity to destroy voices of opposition to the ACCJC’s crusade to narrow the mission of the community colleges.

CFT’s Community College Council President Jim Mahler is clear about the union’s role in this struggle: “We support the fight for fair, transparent accreditation policies so that in the future we can protect access to quality public education for all who want and need it, and prevent an austerity-driven agenda of education available only for those who can afford it.”