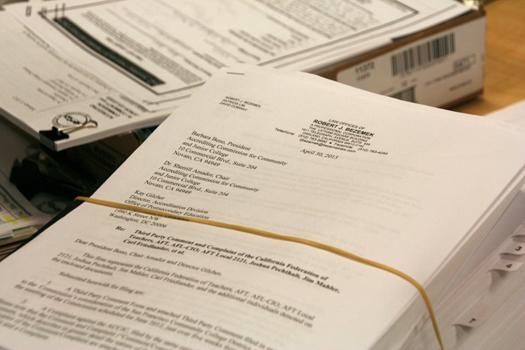 April 30, 2013, Novato—Today the CFT and its City College of San Francisco affiliate, AFT Local 2121, filed a complaint or “third party comment” with the Accrediting Commission for Community and Junior Colleges (ACCJC), and sent a copy to the United States Department of Education (USDOE).

With this action the CFT is protesting the ACCJC’s placement of City College San Francisco on a “show cause” sanction in 2012. The document argues that no sanction, let alone “show cause,” should have been imposed on CCSF. It also notifies the ACCJC and the USDOE that in the view of CFT, the accrediting agency is in violation of federal and state law and its own policies, and has overstepped its authority in a number of ways.

The agency is currently undergoing its own review by the USDOE, and CFT is presenting the complaint as information useful to that process.

In 2006 ,City College of San Francisco was visited by the Accreditation Commission for Community and Junior Colleges during the regular six-year accreditation cycle, and its accreditation was reaffirmed. The ACCJC made recommendations for the college to improve; these were advisory in nature.

In 2012, following another site visit, the ACCJC issued a “Show Cause” sanction, e.g., ‘show cause why the college should not be closed.’ At this point the “recommendations to improve” from 2006 somehow became a need to “correct deficiencies,” a different definition under guidelines for accreditation. The failure to sufficiently address these “deficiencies” was offered by ACCJC in 2012 as a major reason why it imposed a “show cause” sanction.

It was unprecedented for a community college to be jumped from no sanction, over other sanction levels, to “Show Cause.”

Since then the college has suffered the loss of thousands of students due to fears they would not receive credit for classes taken, and would not be eligible for student financial aid. The ACCJC’s action has thrown the college into turmoil, disturbed what had been a collegial atmosphere, and negatively affected the college’s ability to deliver a quality education to its students.

The complaint seeks remedies, the most significant of which are to lift the “show cause” sanction on CCSF, and for the ACCJC to cease violating laws and its own policies in pursuit of an inappropriate “education reform” agenda.