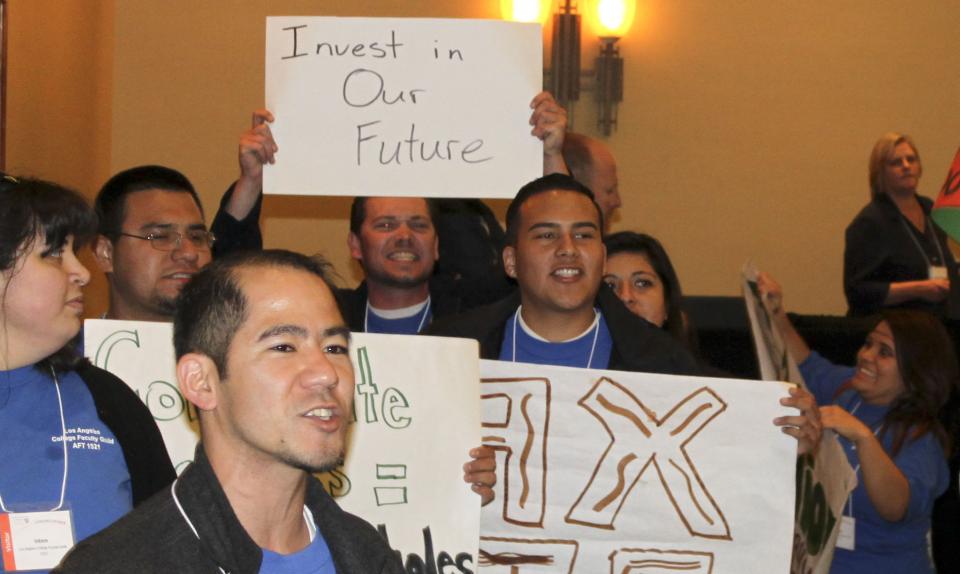 The Reverend William J. Barber II, president of the North Carolina NAACP, and leader of the growing “Moral Monday” movement contesting his state’s descent into the nineteenth century at the hands of its Tea Party government, provided a parable to the 600 elected delegates in the waning hours of the California Federation of Teachers’ 72nd annual convention, held in Manhattan Beach over the March 21-23 weekend.

Barber, whose oratorical style and ability to move an audience recalled that of Martin Luther King, Jr., said, “Elephants feel an attack coming, they form a circle, and place the children in the middle. We can’t allow elephants, in the wild, to have more sense than we do.”

The story accurately captured one of the main threads running through the Convention. Its theme, “Reclaim the Promise California,” proposed the power of united action when the state and local AFT federations build connections with the community to form a circle and resist attacks on public education. And that proposition found validation in plenary presentations, workshops, and keynote speeches throughout the weekend.

Responding to the privatizers

Two banks of workshops covered a couple dozen topics over the next few hours, ranging from “Beyond the Affordable Care Act: Planning for Medicare for All,” to “Labor in the Schools and the Common Core” and “Keep the Community in Community College.” Bargaining, politics, legislative issues, union nuts and bolts, education policy—workshop presenters provided something for everyone at the Convention.

After a reception lasting just long enough to provide delegates with what they needed to forge onward, they were back at it in division council meetings until 10 pm.

These events were followed by an emotional presentation on the life and work of Raoul Teilhet, the CFT’s first full-time president, who oversaw CFT’s successful struggle to achieve a collective bargaining law, SB 160, for public education employees in 1975. Teilhet died last year. Three former CFT presidents, a local president, and a long time CFT staffer recalled what made Raoul Teilhet the effective leader and social movement activist he was.

At this point you might imagine the morning was over. But still to come were state Attorney General Kamala Harris, who delivered a sharp set of observations about the “school to prison pipeline” and her proposals to address it with a set of legislative reforms, and San Diego State Senator Marty Block, who received the CFT’s Legislator of the Year Award for his steadfast support of progressive education policies over the years.

At lunch, a couple hundred delegates packed into the Ben Rust Luncheon, honoring Dick Hemann, long time CFT field rep. Hemann, physically slowed by Parkinson’s Disease, demonstrated there was nothing wrong with his mental faculties or his wit, recalling some of the highlights of his long career as educator and union activist, including revealing the heretofore obscure connections between selling Fuller brushes and union organizing.

State of the Union

After another round of workshops, CFT Secretary Treasurer Jeff Freitas provided the numbers behind the CFT’s work, and President Joshua Pechthalt delivered the State of the Union, clocking in at a tidy 40 minutes as he recapitulated the Convention theme of “Reclaiming the Promise” of public education. Covering a broad swath of topics, Pechthalt drew special attention to the work of our locals in building closer ties to local communities, and looking forward to the coming effort to push CFT’s legislative initiative, Healthy Kids, Healthy Minds (AB 1955) across the finish line.

Pechthalt also highlighted the work of CFT in pushing back against attacks on fair accreditation policies by the rogue Accrediting Commission for Community and Junior Colleges (ACCJC), and on teacher due process rights by anti-union billionaires attempting to hide behind an Astroturf lawsuit, Vergara v. State of California.

Pechthalt’s attention to the accreditation battle reverberated throughout the Convention proceedings, as presenters repeatedly — and for good reason — paid tribute to the hard work of AFT Local 2121 and its president, Alisa Messer, in leading the fight against the effort by vindictive and politicized accrediting commissioners to pull the accreditation of City College of San Francisco.

Members of the large delegation from the local noted “the love shown to us,” as one put it, from other community college locals in particular, but also from the entire body, in the form of standing ovations, resolutions, and pledges to bring the local’s speakers’ bureau to campuses across the state, along with legislation to roll back the ACCJC’s inappropriate activities.

As was true for many of the efforts discussed during the Convention, the battle to save City College and restore fair accreditation practices throughout the state included a defensive aspect as well as a progressive thrust forward — precisely the combination that drives the Quality Public Education Campaign now underway. It seems that Rev. Barber’s advice to emulate the elephants and form a circle had already been taken to heart before he offered up the observation.