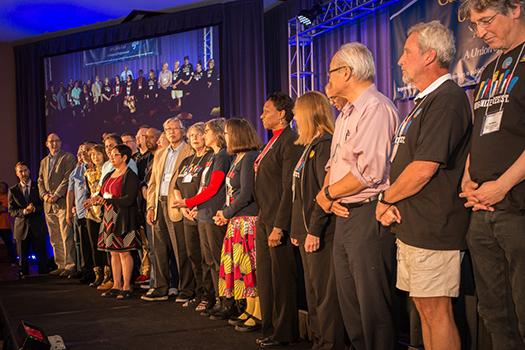 The 75th Annual California Federation of Teachers Convention, held at the Sheraton Grand Hotel in downtown Sacramento, welcomed hundreds of members and memorable speakers eager to combat the destructive and oppressive policies of the Donald Trump Administration. The fact that the first day of the convention fell on Cesar Chavez Day was fitting considering the theme of the convention: Organize. Resist.

The convention was also highlighted by biennial elections, with current leadership receiving overwhelming support for another term.

Day One of the convention featured an all-delegate march through the streets of the state capital in support of immigration rights. Hundreds of CFT members and supporters walked to the west steps of the state capitol building, with a stop at the Sacramento ICE Field Office. The delegation held rallies at both stops.

“We will not allow a McCarthyite environment of fear envelop our schools and communities,” said CFT President Joshua Pechthalt. “We are here to show that educators and the entire community will stand together to ensure that our schools remain safe places of learning for all our students.”

The event had a solid representation from the UCLA Labor Center, including Director Kent Wong and Dream Summer Coordinator Hugo Romero.

“The CFT must take the lead to fight for our immigrant students and their families in this time of crisis,” Wong said. “We stand united to demand, ‘Education, not deportation.’”

Added Romero: “I know what for profit detention and deportation looks like. The same private interests that profited off of my mother’s misery when she was deported are now trying to profit off of privatizing education.”

“Approximately 90 percent of the families we serve are immigrants. Since the new presidential administration came in, we have begun to witness fear in our young students,” Garcia said. “One said to his teacher, do you know who Trump is? The teacher responded, yes. Then the little boy said, Trump wants to send my parents back to Mexico, and I am not going to see them again.”

Added Gemma Abels, president, Morgan Hill Federation of Teachers: “Imagine the bravery it takes for a family to come here not knowing the language and without job prospects. We extol a lot of different acts of courage. Why don’t we celebrate the bravery a family must have to cross our borders? One of my students’ worst fears were realized when his father was deported back to Mexico. Every day he sat in class, trying to concentrate on school while wondering when he would see his dad again.”

Speaking up and speaking out

The keynote speaker was environmentalist and philanthropist Tom Steyer, who spoke about resisting Trump’s policies. “I am obsessed with refuting their lies, and taking a moral high ground,” Steyer said. “Tony Thurmond, who represents Northern California’s 15th Assembly District (which includes East Bay communities that stretch along the I-80 corridor from Oakland to Hercules) and chairs the Assembly Committee on Labor and Employment, also gave a rousing speech, calling education as “the great equalizer.” Former Senate Pro Tem and current mayor of Sacramento Darrell Steinberg, State Sen. Richard Pan and AFT Secretary-Treasurer Loretta Johnson were also warmly received.

Some of the most poignant remarks came from CFT leaders and members themselves. In his annual State of the Union address, President Joshua Pechthalt spoke of recent victories, from Prop 55 to combating the ACCJC, as well as challenges ahead. “Trump’s election represents an unprecedented threat to public education,” Pechthalt said. “The confirmation of Betsy DeVos as Secretary of Education ensures that the Trump administration will not only move a privatization agenda, it will likely go beyond what any Republican or Democratic administration has attempted before.” Read President Pechthalt’s entire State of the Union address here.

One of the most invigorating moments of the convention came at the conclusion of Council President Rico Tamayo’s K-12 division recap. In considering the challenges that labor faces in the coming months and years, Tamayo led a rousing sing-along to Gloria Gaynor’s disco hit “I Will Survive.”

Delegates took action on 23 policy resolutions on topics ranging from community schools to immigrant rights. Highlights include Resolution 1, calling for CFT to provide assistance to members about immigration enforcement; Resolution 14, calling to reclaim the promise of racial equity for Black males in California; and Resolution 13, calling for support of AROS and the statewide day of action on May 1.

Dozens of workshops on Friday and Saturday, led by CFT leaders and staff and outside experts brought educational policy and labor issues before the attendees. Popular topics included “Climate Justice 101: How to Talk About the Climate Crisis with Students and Members,” “The Many Facets of Fascism” and “The New Friedrichs Cases and the Steps CFT is Taking to Prepare.” Friday’s “Labor History and Resistance in the Time of Trump” workshop had 80 people in attendance.

In addition to the statewide union, four division councils of CFT met; Secretary Treasurer Jeffery Freitas delivered a report on the union’s finances; communications awards were handed out in an entertaining presentation by CFT staff Jane Hundertmark and Kevin Cronin; the Legislator of the Year award was bestowed upon Assemblymemembers Kevin McCarty and Phil Ting; Melinda Dart of Daly City’s Jefferson Elementary received the Women in Education Award; and former President of the San Jose/Evergreen Federation of Teachers David Yancey received the Ben Rust Award, CFT’s highest honor.

See our comprehensive photo coverage of Convention 2017 on Facebook. Please tag your friends and colleagues!