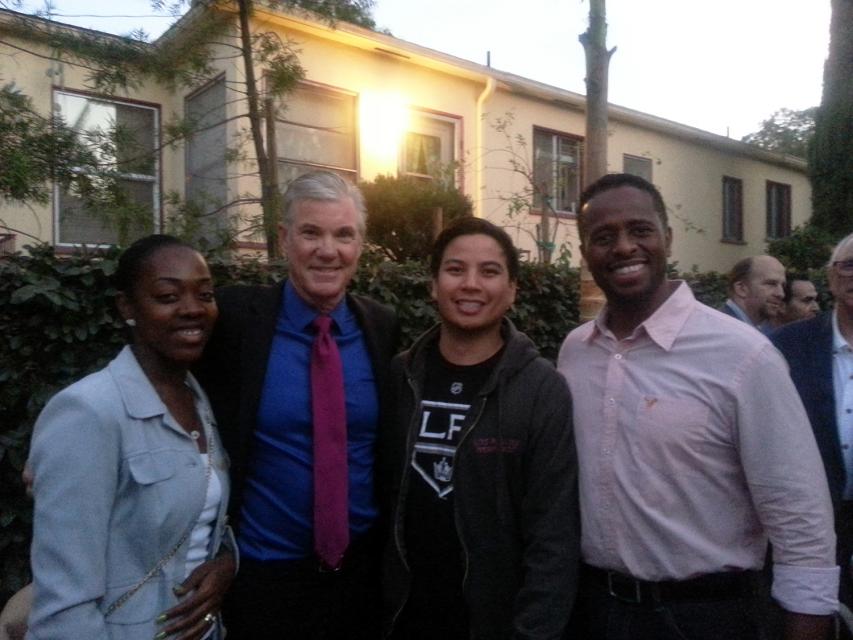 On an election day when much of the country swung to the right, California solidified its standing as the progressive bulwark of the nation. Every single statewide office went to the CFT-endorsed candidate. And the main projectile launched by anti-union forces at public education — the billionaire-backed Marshall Tuck campaign for state superintendent of public instruction — went down to defeat.

From the state to the local level, voters reaffirmed public education and turned their back on corporate reforms and candidates who supported them.

Much of the real action unfolded, as usual, below the radar at the local level. The hard work of CFT members helped enormously in victories in school and college board races, local tax campaigns, and in county office contests, state legislative efforts, and congressional fights.

You could practically hear the collective sigh of relief arising from CFT members across the state as it became clear that the teacher and straight-talking Torlakson beat the Wall Street banker and anti-union Tuck. “We can now expect continued attention paid by the Superintendent’s office to the real issues facing public education, rather than wasting time fighting distracting and destructive ideological battles,” said CFT President Joshua Pechthalt. 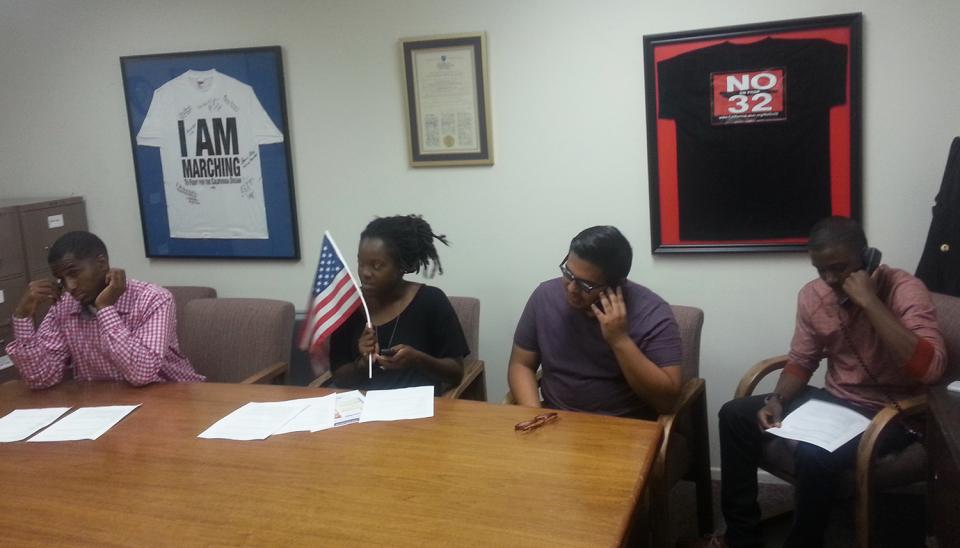 One outstanding contribution to Torlakson’s campaign came from AFT Locals 1521 and 1521A, in the Los Angeles Community College District, who ran joint statewide phone banks for him and for L.A. County supervisor candidate Sheila Kuehl for the past month, three nights a week. Kuehl, a former chair of the state Senate Education Committee and forceful public education advocate, also won.

Another robust phone banking operation for Torlakson came from United Teachers Los Angeles, the largest AFT local west of New York. The local also produced results for Tony Mendoza for state Senate and Mike Gipson for Assembly, each of whom won their respective seats. 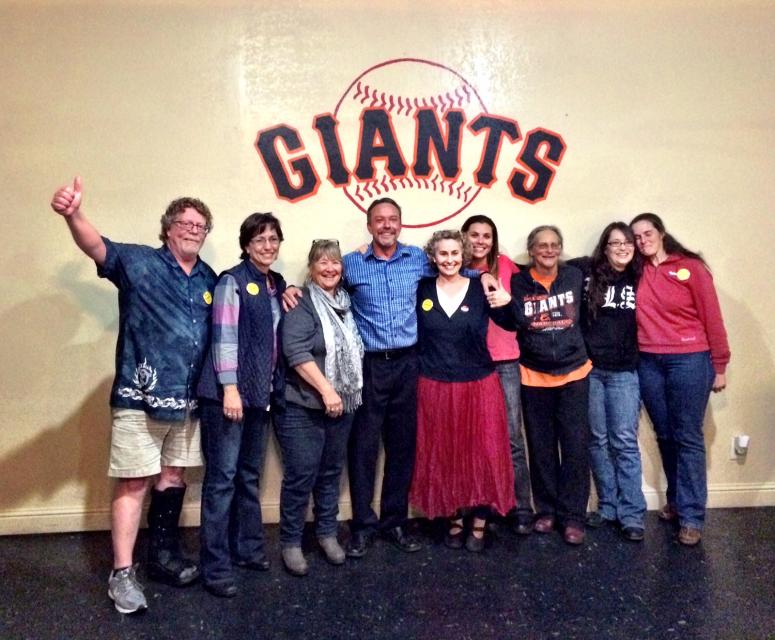 The support shown for real-life education solutions bubbled up from local races all across California. In Morgan Hill, south of San Jose, three out of four union-backed candidates for school board won, while in the contest for an open seat on the Santa Clara County Board of Education, the Morgan Hill Federation of Teachers dealt another resounding setback to corporate charter school forces, as Claudia Rossi defeated a pro-charter incumbent despite $200,000 in spending by the California Charter Schools Association.

Another county-level victory came in Mendocino, where the Mendocino County Federation of School Employees, AFT Local 4345, spearheaded the election of Warren Galletti in the superintendent’s race. Galletti won by a better than 2 – 1 margin. 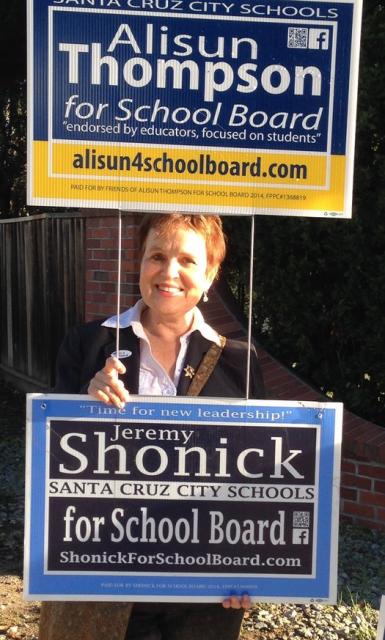 In Santa Cruz, members of AFT Local 2030 worked hard on the races of their two school board candidates, Alisun Thompson and Jeremy Shonick, who challenged incumbents. Special education teacher Casey Carlson, who serves as the local’s political director, and release-time organizer Mark Weller led the effort.

Carlson reported that the union invited its endorsed candidates to talk with teachers at school site meetings. “This made a huge difference,” she said, hearing from many teachers that they became active in politics for the first time after meeting the candidates in person. Shonick, a teacher-educator at UC Santa Cruz, won his race, and came in as the top vote-getter. In the days following the election, it appeared as if Thompson narrowly lost. However, it took weeks to count all the ballots, and in the end Thompson won by 82 votes, proving, as Carlson said, that “every vote counts!”

In nearby Salinas, the electorate followed the advice of the Salinas Valley Federation of Teachers and passed a high school bond measure. In San Luis Obispo County, the hard work of the Paso Robles Public Educators joint CFT-CTA local and the two Cuesta College AFT locals, classified and certificated, paid off with passage of a college bond and a first place finish for the endorsed candidate to the school board. The Jefferson High School and Elementary AFT locals worked with the San Mateo Community College Federation of Teachers to pass high school and college bond measures and elect two to the Jefferson High School District Board.

Further south along the coast, Wes Davis, president of the Oxnard Federation of Teachers and School Employees, lost his run for a seat on the Ventura College Board, but the local’s three candidates for Oxnard High School Board, including Bea Herrera from the Ventura College Federation, AFT Local 1828, fought their way to victory with the union’s help. They beat two incumbents, including one who ran on a platform of “enforcing Vergara.” The local also worked hard on the effort to reelect Julia Brownley to Congress; who at the time of this writing, is holding onto a narrow lead with the race is too close to call. The Oxnard and Ventura locals also helped Jacqui Irwin win an open seat in Assembly District 44. 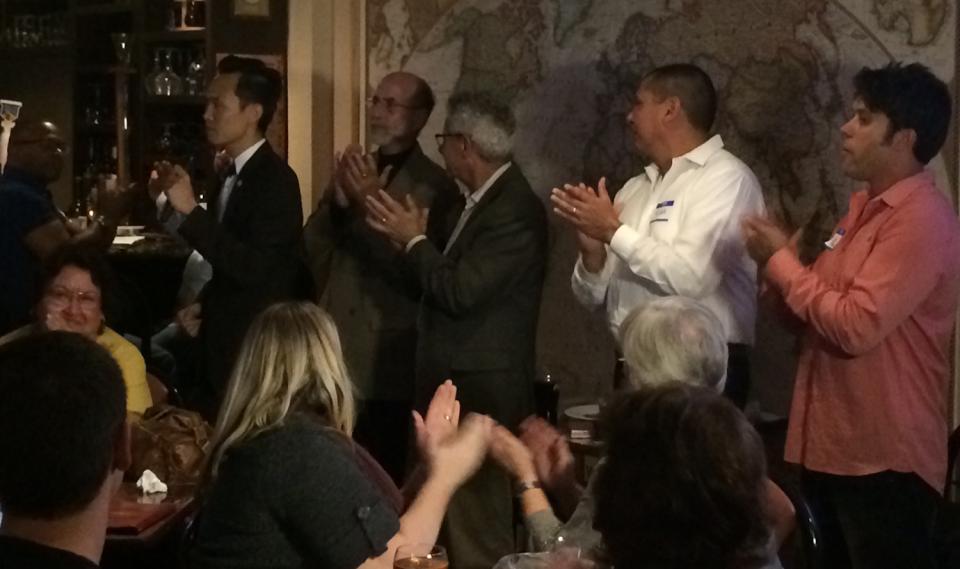 In Orange County, despite the best efforts of the Coast Federation of Educators and the Newport Mesa Federation of Teachers, high school teacher Joel Flores was defeated in his bid for the Coast Community College Board. Flores was supported, of course, by his local, which was also a beacon of Torlakson activism and a strong part of the successful effort to defeat the right wing Measure O, yet another attempt to turn Costa Mesa into a charter city and allow its conservative majority to gut public worker contracts and pensions.

The two AFT locals in Berkeley Unified School District, the Berkeley Federation of Teachers and Berkeley Council of Classified Employees, worked on their school board campaign. The Berkeleyans strengthened a supportive board majority by electing three candidates.

Both unions were also involved in one of the cutting edge elections in the country — to pass a sugary beverages tax, levied on distributors, of a penny an ounce for health education. Big Soda dumped millions of dollars into this small city with a deceptive campaign to make sure it could continue to contribute to childhood obesity and diabetes, figuring that if it could stop one of the country’s most progressive electorates from enacting such a tax, it would serve as a warning elsewhere. But Measure D passed with a resounding 75 percent of the vote, the first tax of its kind anywhere in the country.

Across the Bay, United Educators of San Francisco helped push Prop C past the finish line, replenishing the Children’s Fund with 73.2 percent of voters taxing their own properties 4 cents for every $100 of assessed value for school and children’s programs. UESF elected one of its two school board candidates, while the other fell just short of defeating an incumbent endorsed by the mayor.

The local also supported Measure J, one of a growing tide of minimum wage increases at the city level around the state; it passed by a landslide. “This is a huge victory for the families we serve; maybe parents will be able to drop a second or third job and help their kids with their homework, or be able to show up at back to school night,” said UESF President Dennis Kelly. (Similarly, the Peralta Federation of Teachers contributed to a municipal minimum wage victory in Oakland.)

UESF and AFT Local 2121, the faculty union at City College of San Francisco, also helped to produce the highest county vote percentage for Torlakson in the state, a spectacular 70 percent.

Help them do the job they are elected to do

Assembly and Senate races, as well as congressional contests, were a mixed bag; one piece of good news is that Richard Pan, who championed the CFT’s “Healthy Kids, Healthy Minds” legislative effort earlier this year, won reelection.

Overall the Democrats lost a couple seats in each house, falling below two-thirds supermajorities. But in fact, when they had it the Democrats failed to use it; exerting this power, especially on its single most meaningful usage — passing new taxes to more adequately support education and services — will require another form of union and progressive coalition action: holding legislators’ feet to the fire to do the job they were elected to do.