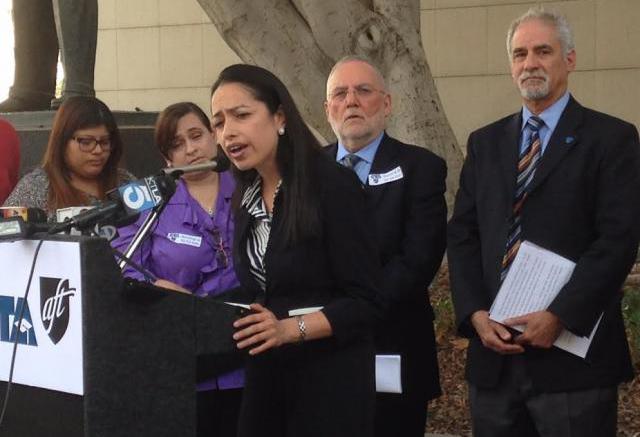 August 22, 2016 — Statement by CFT President
“We applaud the state Supreme Court’s affirmation of the appeal court decision,” said Joshua Pechthalt, president of the California Federation of Teachers. “The teacher shortage facing California has been stoked by the Vergara case, the expensive publicity machine surrounding it, and the constant attacks by so-called reformers on teachers and public education.

“We can now turn closer attention to solving the actual problems we confront in our schools, such as securing adequate funding through Prop 55, reducing class sizes, promoting and strengthening peer assistance and review, and reinforcing collaborative district practices with a proven record of success. These efforts will result in a more positive climate to address the teacher shortage crisis, bring young people to teaching and encourage experienced teachers to stay in the classroom.”

April 14, 2016
LOS ANGELES — In a sweeping victory for students and educators, the California Court of Appeal today reversed a lower court decision in the deeply flawed Vergara v. California lawsuit. The unanimous appellate opinion is a stinging rebuke to Judge Rolf M. Treu’s poorly-reasoned ruling, and to the allegations made and millions of dollars spent by wealthy anti-union education reformers” to bypass voters, parents, and the legislature with harmful education policy changes. The reversal affirms the arguments of educators, civil rights groups, legal scholars and education policy experts that the state statutes affirming educator rights do not harm students. Read the press release.

September 16, 2015
LOS ANGELES — Some of the nation’s top legal scholars, education policy experts, civil rights advocates, award-winning teachers, school board members and administrators filed five amici curiae, or “friend of the court” briefs with the California Court of Appeal today. They shine a spotlight on the numerous and major flaws that would harm students in last year’s decision striking down important due process rights for California educators, as well as other laws governing hiring and layoffs of state educators. Read the press release.

“It would be very scary to me, if this lawsuit succeeds, to think that I might not have a job next year, not for anything I’d done in the classroom, but because my principal didn’t like me, or my clothing, or something I’d said.” — Laura Lacar, Gahr High School, ABC Unified School District

In 2012 a group calling itself “Students Matter,” funded by David Welch, a conservative Silicon Valley millionaire, filed a lawsuit, Vergara v. the State of California. The lawsuit challenges a number of constitutional rights for California’s teachers, including “tenure,” due process rights, and seniority rights during layoffs. The suit, hiding behind a group of students, alleges that these teacher workplace rights infringe the constitutional right of students to an equal education. CFT and CTA joined the defense in 2013, challenging Vergara as a “…meritless lawsuit by corporate special interests attacking teacher professional rights.”

The lawsuit ignores the real problems of public education

Education Code rules to protect teacher rights from administrative mismanagement are not “unfair” to either students or new teachers. What harms students? Economic inequality, poverty, their parents’ joblessness, and underfunding are unfair to students. But this lawsuit ignores these barriers to educational success. The premise of “Vergara” is that public schools are failing, and bad teachers are the reason why. Get rid of the “bad teachers,” and the schools will succeed. This simplistic idea is wrong in a number of ways. Most public schools are successes, by most reasonable measures; and while the role of the teacher is always an important in-school factor, external factors like poverty and underfunding have the greatest impact.

Stripping teachers of their workplace professional rights will harm, not improve, student learning

Anti-public education “reformers” are forever repeating that rules and regulations make it impossible to fire “bad teachers.” Here are the facts. During the first two years of a teacher’s career, a lengthy probation period, administrators can fire them for any reason, or for no reason at all. After that, the requirements are for the administrator to document the problem necessitating the teacher’s dismissal, and convince two out of three people on a panel of experts to agree. That’s it. A teacher’s simple right to a hearing before dismissal is not unfair to students. To the contrary: students need a stable, experienced teaching workforce, not a revolving door of educators.

Attracting and retaining teachers has always been one of the biggest problems in the field of education. Teaching is a difficult, underpaid, and too often undervalued profession – and recent attacks like “Vergara” have only worsened these problems. Most teachers leave the field within the first five years. We need to be encouraging teachers to enter the profession and stay—not demonize them. The laws targeted in this case provide due process when a teacher is accused of misconduct or poor performance, and objectivity in times of layoff. These laws benefit the education system as a whole.

The right to a hearing before dismissal (what people call “tenure”) became law through the understanding that political pressures and arbitrary actions of administrators could and often did destroy academic freedom: the right to teach to academic standards and curriculum in a balanced fashion, with all points of view aired, rather than through one viewpoint. The need for academic freedom, and therefore for “tenure,” was demonstrated repeatedly, for instance, during the McCarthy era. Note also the case of Sal Castro, an historic figure who advocated for ethnically relevant courses for Latino students in Los Angeles in the 1960s. The district dismissed him essentially for being an advocate for students and he was only able to get his job back when the community organized for mass actions and took over the school board to get him reinstated. Educators play a special role in a democratic society in challenging assumptions and raising difficult questions. This is not true in many countries where the state dictates all.

Seniority is transparent and fair, and not the reason why layoffs occur

Another wrong premise is the assumption in “Vergara” that seniority order dismissal during layoffs means bad teachers are kept while good teachers are dismissed. The problem with layoffs is not seniority. The problem is the underfunding that causes the layoffs — lack of revenues, exacerbated by the ongoing aftereffects of the economic recession. It is more accurate to say low tax rates on the rich has caused our funding crisis for public education, hence layoffs, then to pretend that orderly dismissal rules are “unfair” to new teachers.

The wealthy backers of this suit are not pro-public education; they are anti-union

The funders of “Vergara” do not fit any pro-public education or pro-civil rights profile we know about. They are using civil rights rhetoric to achieve their goal of destroying teacher rights. But look at who they are, and their track record. The backers of this lawsuit — especially David Welch, a charter school entrepreneur—include a who’s who of the usual anti-union, anti­ public education suspects (Parent Revolution, Eli Broad) funded by the billionaire’s club and their Astroturf front groups. They are really good at coming up with fair-sounding names, like “Students Matter,” or “Students First,” which however mask a privatizing, union­ busting agenda. None of these people or organizations were anywhere to be seen during the campaign to pass Prop 30, which, by filling in part of the hole ripped in education funding over the years, stopped layoffs this year, and did more to support equal access to education for all students than anything proposed in this lawsuit.

IN THE MEDIA — A CHRONOLOGY