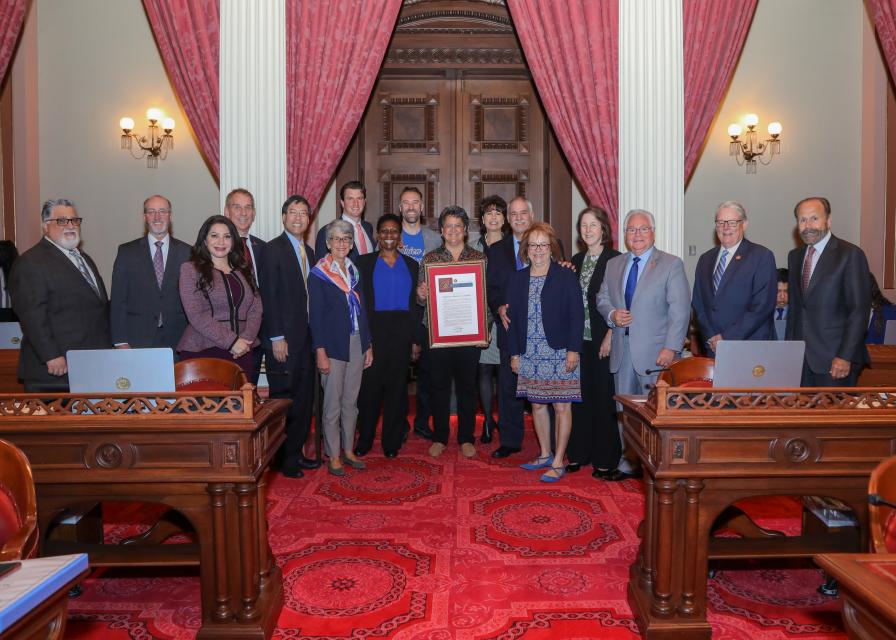 On May 16, the California Senate presented CFT leaders a resolution in honor of the Federation’s 100th Anniversary. The text of the resolution follows.

Whereas, The CFT was founded in 1919 to provide a labor union alternative for classroom teachers and celebrates its 100th year anniversary on May 31, 2019;and

Whereas, the CFT is a union of professionals affiliated with the more than 1.7 million member American Federation of Teachers, and through it with the AFL-CIO; and

Whereas, the CFT comprises the state’s 145 local unions chartered by the AFT. Each local is affiliated with its regional AFL-CIO Central Labor Council and the California Labor Federation; and

Whereas, through its local unions, the CFT represents more than 120,000 educational employees working at every level of public and private education from Head Start to the University of California; and

Whereas, in all segments of education, the CFT is committed to promoting high-quality education and to securing the conditions necessary to provide the best services to California’s students; and

Whereas, to gain employee rights taken for granted by other workers, courageous CFT members and lawyers tested the courts again and again, building a strong body of case law; and

Whereas, to provide essential workplace rights, the CFT in 1953 introduced the first teachers’ collective bargaining bill in the California Legislature. It reintroduced similar bills for the following two decades, until passage of the Educational Employment Relations Act in 1975 finally brought collective bargaining rights to K–14 teachers and classified employees working in public education. Since then CFT has represented these employees in professional and employment-related matters; and

Whereas, three years later, in 1978, CFT helped pass the Higher Education Employer-Employee Relations Act, bringing the benefits of collective bargaining to university employees. Today the CFT represents lecturers and librarians at the University of California; and

Now, therefore, be it resolved by the Senate of the State of California, the Assembly thereof concurring, do hereby honor CFT’s 100th year anniversary; and

Be it further resolved, that the secretary of the senate/assembly transmit copies of this resolution to the author for appropriate distribution.