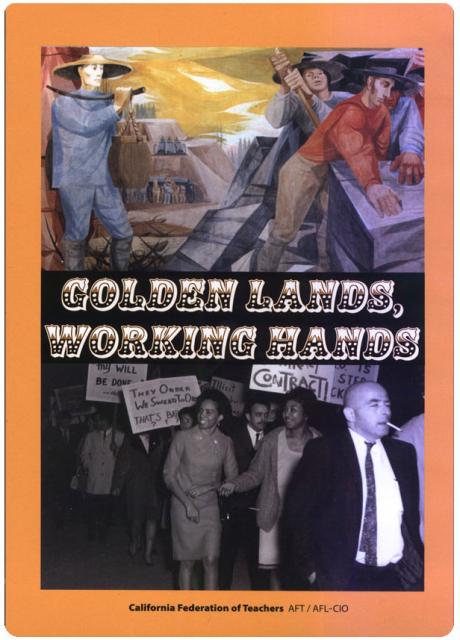 This powerful ten-part video series brings the hidden history of working people to light. Golden Lands, Working Hands documents the events and issues central to California labor history, from the Gold Rush through the present. The award-winning series has been seen on public television and in museum exhibits, in high school and college classrooms and in union halls.

Golden Lands, Working Hands introduces students, union members and the general public to California labor history in order to encourage understanding of the state’s diverse working populations and their efforts to find common ground in struggles for social justice. It is meant to be shown one part at a time in conjunction with reading materials and lesson plans suitable for high school students, and for union members in new member programs. The series runs three hours total.

While several videos exist on selected topics within California labor history, there has been no overview—until now. Golden Lands, Working Hands explores stories selected from more than a century and a half of struggle. Central themes examined by the video are the choices made by working people in the creation of their own organizations, and the consequences of these choices for improvement of working people’s lives. Close attention is also paid to the ongoing recomposition of the California working class through immigration, beginning with the Gold Rush and continuing to the present day.

Much of this history has been unearthed through scholarship. But Golden Lands, Working Hands makes these ideas accessible to a broader audience: It conveys a picture of working people of diverse background and culture who have, at crucial moments, overcome social barriers to achieve lives of common dignity in California.

Golden Lands, Working Handswas directed and written by former Communications Director Fred Glass for the CFT. It is narrated by Joe Morton, with reenactments and other voices including those of Geoff Hoyle, Sharon Lockwood, and Herbert Siguenza. The project was funded by more than 400 contributions from union locals, labor councils, and internationals, mostly from California. Additional funding came from California Council for the Humanities, PG&E, and Kaiser Permanente. KCSM-TV donated the post-production services.

Grades: High school and up
Cost: