SAN FRANCISCO – On Friday, dozens of educators were arrested following a march and rally calling for “the public education that all Californians deserve” while protesting the hard line taken by City College of San Francisco’s administration in contract negotiations with CCSF’s faculty union, AFT 2121. The show of unity came on the first day of the annual statewide convention for the California Federation of Teachers.

Members marched from the convention hotel in downtown San Francisco in a light rain to the law offices of Jeff Sloan, the chief negotiator for City College administration in collective bargaining with AFT 2121. CFT members were arrested for blocking the door of Sloan’s offices in an act of civil disobedience. 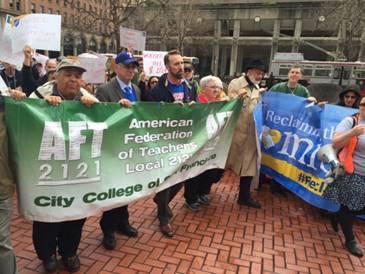 For more than a year City College faculty has been struggling to negotiate a fair contract for its 1,500 members with the college’s administration. On Thursday the union announced that its members had voted overwhelmingly to authorize a strike should negotiations fail.

“Today’s march was in support of City College faculty and students, who have suffered enough at the hands of the destructive accrediting commission, ACCJC. They should not also have to endure the bad judgment of their own college administration,” said CFT President Joshua Pechthalt. “Our action today also represents a statement by our members that California’s students – not only at City College but from preschool through university – deserve to be made a priority. We do so by funding our classrooms with an appropriate level of revenues, not by slashing education programs and failing to pay education employees a salary that can keep up with the skyrocketing cost of living in our cities.” 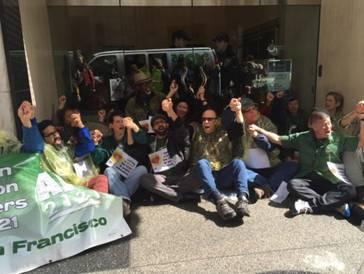 CFT’s convention is an annual gathering of six hundred union leaders, members and staff to discuss, debate and decided on important public education and labor policy issues. Extending the progressive income tax component of Prop 30, addressing the growing teacher shortage, combating the Vergara v California lawsuit that threatens teacher workplace protections and ensuring that the state’s community college system receives a fair accrediting process are among the topics being discussed this weekend.