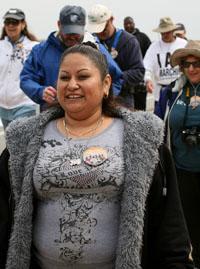 MANTECA, CA (4/11/10) — Beginning the final stretch before their arrival in Sacramento, the hardy band of walkers in the March for California’s Future passed into the California delta at Manteca and Stockton.

The peregrination that began on March 5 set it’s goal as the building of a movement to end the budget cutting that has decimated the state’s educational system, leading to thousands of pink slips for teachers. Cuts have imperiled as well the jobs of countless people who do the necessary work of taking care of the sick and elderly, keeping state parks clean and open, and providing much of the social glue that make California a livable place for its residents.

Yet every year, the jobs of those people are put in danger by the fact that a two-thirds majority is needed to pass a budget or to find new revenue. A minority of Republicans in the state legislature can hold the budget hostage until the majority agrees to slash spending instead of finding new tax dollars.

Chief among those implementing this strategy are Tom and Bill Berryhill. The north part of the San Joaquin Valley is Republican country, dominated by the Berryhill brothers, whose legislative program in Sacramento is exactly what the march seeks to end. Each is a member of the State Assembly. Marchers first passed through the district of Tom Berryhill, who lives in Modesto, home of the Gallo wine empire. Then they passed into the district of his brother Bill, who represents Ceres, and sits on the board of the Allied Grape Growers. Both inherited their careers from their father, legendary Republican legislator Clare Berryhill.

“It feels like the growers and the conservative Republicans have it locked here,” says marcher Jenn Laskin, a continuations schoolteacher from Watsonville. “It’s difficult to explain that to get enough Republicans to pass a budget they need to be bribed with tax loopholes.” One consequence of the budget cuts, she predicts, will be the complete loss of in-home services for the aged and disabled. “Old people, sick people, people with special needs I guess would have to be put into institutions, which is really no solution, since there’s no space for them. That’s why so many home health care workers are marching with us.”

Assemblyman Bill Berryhill bemoans that Stockton’s schools have just sent out 192 layoff notices. But turning reality on its head, he says budget cuts are not responsible. “Since I first arrived at the capital fourteen months ago,” he fumes, “I have been shocked to see the barrage of misguided proposals for tax increases, fee hikes and more regulations on families and job creators. We already pay some of the highest taxes in the nation, including gas and sales taxes, and yet some lawmakers want us to pay more.”

The state senator for the same area is Jeff Denham, who gets an A+ rating from the Howard Jarvis Taxpayer Association (architects of the tax-cutting policy that is driving the state into astronomical debt) and a perfect score from the California Taxpayers Association. Denham owns Denham Plastics, which makes the plastic clamshells farm workers pack with strawberries out in the fields. His family, like the Berryhills, are growers.

Behind these legislators are the most extreme elements of the state’s Republican Party – the California Republican Assembly. That group gave the Berryhills 67 percent ratings. Abel Maldonado, a Republican who voted for the budget last session, got 22 percent, lower than some Democrats. The Stanislaus County GOP, a pillar of the Berryhill support base, lists its principles as “smaller government, lower taxes, individual freedom, strong national security, respect for the sanctity of life, traditional marriage, the importance of family and the exceptionalism of America.”

The two Chowchilla facilities are actually small by comparison to some of the others in the towns traversed by the march. Corcoran, not far to the south, holds 5544 inmates, employs 2322 staff, and has a $270 million budget. The town has a second prison as well, the Substance Abuse Treatment Facility (7628 inmates, 1786 staff, $230 million budget.)

Despite the jobs in the two facilities, however, Corcoran, like most Valley towns, has much higher unemployment than the state’s average – 19%. The General Fund budget for the Corcoran schools last year was $29 million – a twentieth of the budgets of the two penitentiaries. The prisons are like giant behemoths in towns like Corcoran, with budgets that dwarf schools or city services. Yet for all the promise of jobs, they don’t make much of a dent in the joblessness endemic to rural California.

Going by prison after prison was especially heart wrenching for Irene Gonzalez, who joined the march, not as a teacher, but as a worker in the criminal justice system itself, and a leader in her union, the American Federation of State, County and Municipal Employees. She looks at the institutions, and knows not just who they house, but the people who work there. She doesn’t see them as enemies, or people sucking up budget dollars that should really go elsewhere, but as workers trapped by the same budget cuts attacking other public employees.

“In the probation department in Los Angeles, where I work, we service the community in rehabilitating minors and adults, and a lot of our services are being cut too,” she explains. “We used to give referrals, and could provide help in getting jobs or developing reading skills. But with the cuts we can’t do that any longer.”

All told, the total prison count for the San Joaquin Valley alone (not counting institutions in the rest of the state) gives an inmate population of 67,059, incarcerated in 13 institutions, guarded by 21,215 staff at a cost of $2.4 billion. The same Republican block in the legislature that opposes tax increases and calls for cutting the budget does not oppose prison construction, however.

Gonzalez predicts a social explosion if the state’s priorities aren’t changed. “It should not cost us an arm and a leg to send our kids through college, or to go there ourselves. What they’re going to have is more people living on the streets,” she predicts. “These legislators say they’re against crime, but then they take away people’s jobs and homes. What do they expect?” She’s the angriest of the marchers. “It’s time for us to start standing up and fighting back,” she vows. “We’re going to make sure you hear us, and hear us loud.”

That voice will be heard in two more weeks, when the march arrives at the state capitol on April 21.