Week 3: March for California’s Future A substitute marches for all teachers 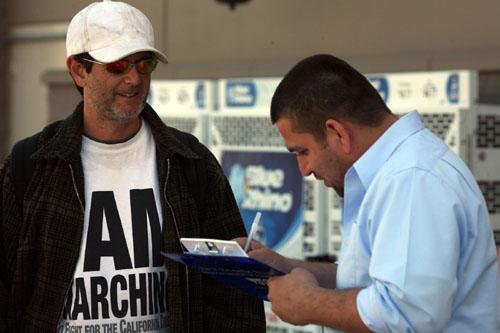 REEDLEY, CA (3/20/10) – It’s almost impossible for any teacher to take 48 days out of the school year to march to Sacramento, no matter how high the stakes. So it should be no surprise that the teacher walking to Sacramento representing the thousands of members of United Teachers Los Angeles is a substitute teacher, David Lyell.

L.A. is probably getting more than they expected, though. Lyell is not only eloquently denouncing the budget cuts that are decimating districts around the state, but with equal passion is advocating for respect for one of the most necessary, yet most overlooked groups of educators in the system. As thousands of pink slips go out to teachers around California, everyone is scrambling for work, permanent teachers and subs alike. Lyell advocates for both — for the jobs of all teachers affected by the slashing of the state education budget, and for the welfare and respect needed by his own colleagues.

“In the last two years, over $18 million has been cut from education,” he charges angrily. “California is 47th in per pupil spending. I just don’t get it. How can we be a civilized society, and just accept that we’re 47th – that this about right for us. It seems criminal. The legislature needs to properly fund education. The two-thirds majority needed to pass a budget has to be changed to a simple majority, so that we can get some adequate funding.”

Lyell describes the difficult life of teachers, even in more normal times. “There’s a perception of teachers that I think is really unfair,” he explains, “where some people think they get to leave at 2:30 or 3 o’clock. In my experience, the teachers I know all get up at 5AM to making lesson plans before school. They’re going to meetings after school, then they’re going to parent conferences, and then at night they’re staying up late grading papers. So they’re really overworked. And underpaid.” 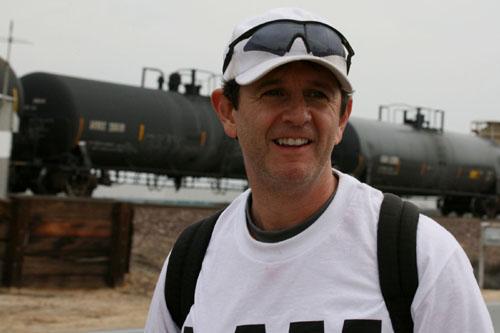 It’s not hard to imagine the impact this tall, lanky man, with his salt and pepper beard, has on students when he substitutes in K-5 classrooms. One of the biggest challenges for any sub is maintaining an orderly learning environment. Everyone knows the stereotype of students running wild in the absence of the firm hand of their regular teacher. For Lyell, though, the stereotype is not only inaccurate – it obscures the important steps needed to help children develop self-control, especially at an age when learning those skills will affect them for the rest of their lives.

“Kids have to understand that we’re there to learn, so we need to respect each others’ differences. Don’t get mad if somebody calls you a name. That sort of thing. It saddens me to see that some kids have such trouble with this because they’re smart, great kids. As a substitute teacher I take pride when even though I’m just there for a day, I’m able to reach a student, and show them, ‘hey, there’s another way.’

“Many times I’ve been in a classroom, and frankly, there are some behavior problems. If there are two kids fighting, I’ll pull them both aside and talk to them about why they’re fighting. I’ll get the to realize that there was just a misunderstanding a miscommunication, that somebody’s feelings got hurt and we just need to be respectful. That happens a lot. There are a lot of kids with behavior problems, who need an opportunity to talk with someone about their feelings. Then they can get back to working – to reading and writing and learning.”

But what happens when a teacher is faced, not with 20 students, but with 30 or more? What happens when budget cuts not only reduce the number of teachers and increase class sizes, but also increase the workload of those teachers who remain?

“I’ve seen schools where teachers have to do more and more with fewer resources,” he says sadly, “and can’t provide children with as much counseling or spend individualized attention with the kids. They’re constantly spending all their time in meetings. They’re working with the children as hard as they can, but they can’t always get to everybody. Because teachers are so overworked, and class sizes are so big, it’s just hard to reach all those kids.

“Some kids just have anger management problems – they don’t know how to keep a cool head, or haven’t learned to agree to disagree, or to express themselves in a positive way without resorting to violence. It’s sad because I want to reach out to them, and you can’t when class sizes are over 30 kids. Especially when students are bigger and when you have more kids with that kind of background, it’s harder to reach them.”

These issues confront regular teachers and substitutes alike. “As a substitute I’m also confronted with large class sizes,” Lyell says. “I’m able to offer children an opportunity for education, but it would be a lot easier to do it if we had smaller class sizes. It just saddens me that last year we had 1800 teachers who were laid off in LAUSD. This year the district issued 3000 pink slips. It’s criminal for our society not to offer children at least the opportunity to receive an education.”

As he’s walked up the San Joaquin Valley, Lyell has had the chance to talk with other teachers on the way, and has found that experiences are very similar. One day the marchers were able to talk with two different meetings of teachers in Reedley, a tiny town among grapevines and peach orchards. “They told us they’d gotten into education because they wanted to make a difference in the lives of children, but that with the budget cuts, they’re not able to do it,” he recalls.

He and his fellow marchers have asked them about the role their own local legislators have played in creating this problem by insisting on state budgets that slash education spending, while refusing to consider any new taxes or sources of revenue. “They talked with us about the fact that their legislators are working against their interests, and that they’re going to be held accountable in the elections,” Lyell remembers. “’If they’re not going to support education,’ they say, ‘we’re going to get them out of there.’ We need to do that by organizing and getting the message out and educating people. That’s what this march is about. I love going into these towns. When we went into Dinuba, people came out of their homes to talk to us. When we told them why we’re out here, they were really excited.”

Lyell is also using the opportunity provided by the march to call for greater respect for his fellow substitute teachers. “We take our jobs very seriously,” he insists. “I teach effectively, and I make sure the kids have fun. I can go into any classroom, K-5, with or without a lesson plan, figure out in a short period of time where the kids are in their learning, and what I need to focus on that day. We get right down to business, and I teach. I try to do it with a sense of humor so it’s not torture for them, but we get it done.”

To change the status of subs, he advocates changing the Ed Code to create a separate credential. “Districts could hold us to a higher standard. We’d be reviewed and critiqued on our performance. And in return, we’d have more professional regard. We maintain a cohesive atmosphere of learning in a regular teacher’s absence, so that when they return they have a stronger place to build from. Yet we’re so often overlooked, and it doesn’t make any sense to me. We should professionalize what we do. Substitute teachers need the same protections as regular classroom teachers.”

It’s hard to imagine that Lyell once considered himself an apathetic person. “I know there’s a lot of apathy out there, and I used to be apathetic myself,” he claims. “But I believe now we can make a difference by organizing and working together. I know it’s going to build because, man, we still have a month out here. This is an amazing opportunity.”