The March for California’s Future 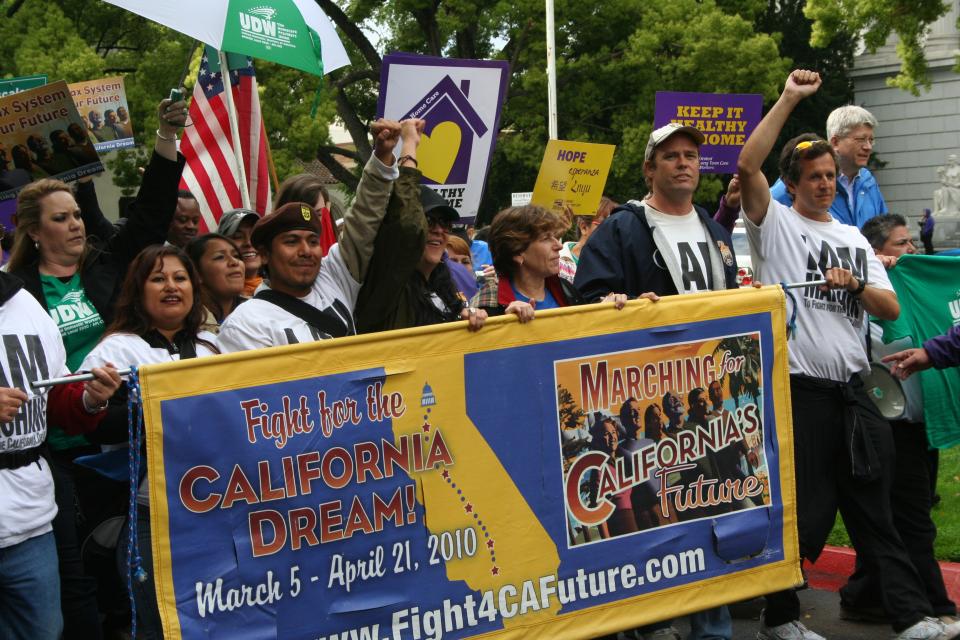 April 21, 2010, Sacramento—With a huge, boisterous crowd estimated at 7500 joining feet with the six core marchers who walked more than 300 miles from Bakersfield over the previous forty eight days, the CFT-led March for California’s Future arrived in front of the state Capitol on schedule at 3 pm on April 21.

Its purpose is to draw public attention to three urgent ideas:

Not one legislator addressed the rally, although many had asked to do so. Instead, 80 bus loads of union members from as far south as San Diego and as far north as Eureka heard from their own leaders, from students, from pastors, parents, and finally singing children, whose after school program in Bakersfield had been hit by budget cuts. At the end of a long day, following bus rides, the march through rain-soaked streets, and many speeches, the kids’ rendition of “We are the world” as the sun broke through the clouds brought smiles to most of the faces in view of this reporter and a fitting close to a beautiful day.

Only time will tell whether the second goal was met. No one expected that the march itself would accomplish the huge task of building a solid and powerful political coalition. But the realistic expectation was that seeds would be planted, and there can be no doubt that that has occurred.

Not acts of nature or God

The March for California’s Future had two goals. The first was to spread the perspective as broadly as possible throughout the radius of the march that the state budget crisis and its attendant local ravages were not acts of nature or God, but the result of conscious choices made by the Legislature and Governor. The marchers—San Diego City College professor Jim Miller, Los Angeles probation officer Irene Gonzalez, retired southern California teacher Gavin Riley, Watsonville community organizer Manny Ballesterors, Pajaro Valley teacher Jenn Laskin, and Los Angeles substitute teacher David Lyell—delivered this message at rallies, town halls, union meetings, and at schools and college campuses, as well as in churches and community halls. They said that California must restore the promise of public education, demanded a state and economy that worked for all the people, and proposed fair tax increases on the rich and corporations to pay for a future worth living in.

The marchers succeeded beyond expectations in gaining press coverage throughout the central valley, capped by stories in statewide media on the last leg and rally in the Capitol. People along the march route told the walkers continuously they had read about them, or seen them on TV. Many joined in walking for hours or days, inspired by what they had seen or heard of the march in the local media.

“The purpose of the march was to draw public attention to three urgent ideas: Restore the promise of public education; A government and economy that work for all Californians; and Fair tax and budget policies to fund California’s future.”

The second goal was tougher, which was to build organizational relationships as the marchers went north through the valley—not only to stage these events, but to put in place the foundation for something more lasting: a progressive political coalition that could change the way the state runs itself. As they made their way north, the marchers and their supporters gathered signatures to put the Majority Vote Budget Act on the November 2010 state ballot. If it passes, this initiative will overturn the undemocratic two-thirds requirement for the state legislature to pass a budget, replacing it with simple majority vote.

In this activity, the CFT worked closely with AFSCME. One of the core marchers, Irene Gonzalez, is an AFSCME member, and the marchers received tremendous support from the AFSCME-affiliated United Domestic Workers every step of the way. AFSCME is also a partner with CFT in the Budget Majority initiative, together with the California School Employees Association (CSEA), the Firefighters, and California Faculty Association (CFA), and all these organizations worked to make the march successful. Service Employees International Union (SEIU) locals in the valley also contributed support in rallies and a dozen busloads of members the final day, and the United Food and Commercial Workers supplied the march with food for a week, as well as airing a radio ad urging listeners to come to Sacramento on April 21.

Only time will tell whether the second goal was met. No one expected that the march itself would accomplish the huge task of building a solid and powerful political coalition. But the realistic expectation was that seeds would be planted, and there can be no doubt that that has occurred.

A lot of listening

The marchers did at least as much listening as talking over the seven weeks. They heard from laid off third generation schoolteachers. They heard from farm workers who had marched with Cesar Chavez in 1966. They heard from a congressman who invited them to a town hall to counterbalance an expected appearance by Tea Partiers due to the elected official’s vote for the Obama administration’s health care bill (the tea-baggers didn’t show, but the congressman had his picture taken with the marchers after the town hall). They received support from the United Food and Commercial Workers, who supplied food for a week and produced a radio ad urging listeners to attend the rally in Sacramento. They were also fed fruit by the side of the road by a woman who had seen them on TV the night before, and rushed out to share her lunch, and had dinner cooked by CSEA members in a Grange Hall in Galt.

When the CSEA chapter chair welcomed the marchers before dinner in Galt, she cried as she thanked them for what they were doing. The marchers saw such emotion many times along the way. And no wonder: someone was paying attention. Someone was reaching out, asking to create community. Someone was offering a perspective on why the California Dream wasn’t turning out as expected, and it was a perspective that made sense, and involved the hope of changing things with collective action.

As CFT president Marty Hittelman told the enormous gathering in front of the Capitol on April 21, “Today, this rally is not just the end of the march, but a beginning, the start of the next step in the fight for California’s future.”

Weeky reporting on the march