Courage Campaign honors Pechthalt with its United in Courage Award 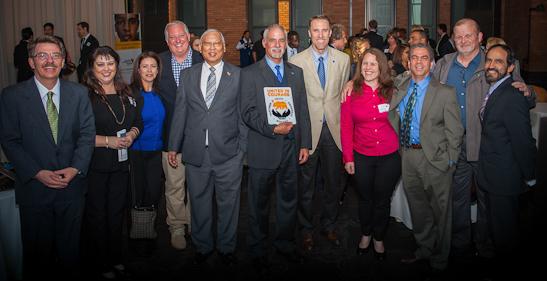 This year, the Courage Campaign feted Pechthalt for his influential work in bringing together a strong coalition of partners to ensure increased, yet progressively raised, state revenue for funding vital human services, including but not limited to public education in California.

The Courage Campaign also pointed to Pechthalt’s fight for school-based healthcare services and expanded library hours so that children in California are healthy, safe and able to achieve their goals.

What follows are Pechthalt’s remarks that night.

Thank you so much for this award. It means a lot to me to be recognized by an organization and individuals whom I respect and have played such an important role in the progressive community, fighting for economic and social justice.

While I am honored to receive this award, I believe it truly recognizes the work we all played in the fight for the Millionaires Tax and the effort to convince Gov. Brown that a merged measure was in the best interest of all Californians. It is my firm conviction that without our work to support the Millionaires Tax, Proposition 30 would not have been as strong a measure and that it would not have been successful.

The work on the Millionaires Tax and Prop 30 was a collective effort. On the CFT side, Jeff Freitas our secretary treasurer, our leadership, staff and our members were very clear that we had to make a fight for more funding and that wealthy Californians had to pay more.

The involvement and leadership of our community partners was also key to this victory. Early on, the CFT understood that this could not be a union only effort. Maybe that realization was borne out of the knowledge that the CFT does have the resources of some other unions and that if we are to move a progressive agenda in California it must be done in coalition with labor and community.

In particular, I want to acknowledge the work of Rick Jacobs and the Courage Campaign and Anthony Thigpenn and California Calls. Rick and Anthony and then Amy Schur from ACCE were instrumental in helping navigate the difficult terrain of the Millionaires Tax and then making sure that the Reclaim California’s Future coalition, which we had created, continued to be an official part of the Prop 30 campaign.

The results, as we all know, have been dramatic. After years of devastating budget cuts, California has begun to restore funding for education and public services and the dire predication coming from the opponents of Prop 30 that its adoption would lead to an exodus of rich people did not pan out. California is a great place to live and asking the wealthiest Californians to pay a bit more in taxes has made the state better for all.

Of course much more needs to be done and many of us in this room are currently working on an effort to amend Proposition 13 and put it before the voters in 2016. That will be a very difficult struggle, but if we are serious about reforming and improving public education, rebuilding our roads, bridges and highways, improving vital services for our neediest residents, then we have to take on Prop 13.

I also want to raise an issue that continues to threaten the likelihood of success on reforming Prop 13 and moving a progressive agenda in California and nationally.

In this period of declining union membership, the last sector of the economy that is still well organized and capable of playing a decisive role in elections are the public sector unions and education unions in particular. Unfortunately the current attack on teacher rights has used the language of the civil rights movement and the real problems of economic disparity to argue that the answer to the problems of public education are best solved by pushing market reforms. If these market reforms are successful, they will create greater disparity among our students and weaken the power of education unions to move a progressive agenda.

We see this in the Vergara lawsuit, creating a fast=track for students willing to pay higher fees in community colleges, endless testing, promoting merit pay, eliminating seniority and due process, promoting non-union charter schools. All these reforms have at their core the notion that the competition of the market place will improve the performance of teachers and students.

The history of working people and communities of color tell us a very different story, however. Without restraints, the market place rewards a few and creates greater inequality and disparity.

Unfortunately we see a growing number of friends and organizations not only buying in to the ideas promoted by the market reformers but also influenced by the dollars the billionaires and corporations can offer.

Those of us involved in education know what needs to be done. It’s not a mystery. We spend out lives in the classroom; we see what works and we spend lots of time reading, discussing and thinking about how to make our teaching more effective.

But when social services are cut, unemployment and underemployment is on the rise, the single minded focus on the classroom and the school site must be viewed as a massive diversion from taking on the issues of poverty and wealth-the real issues that shape academic success.

Unfortunately, we in the education union world have not done a very good job of engaging the public on these issues and explaining patiently what works and what doesn’t and why worker rights are not counter posed to the rights of students.

As part of that effort the CFT has launched a legislative effort AB 1955, called Healthy Kids, Healthy Minds, to put a full-time nurse and mental health professional in every school and to make sure school libraries are open before and after school.

We believe this is the kind of effort that has at its core the notion that our students, our children, are not simply widgets to be measured but are human beings to be nurtured and that begins in our schools.

We hope we can count on you for your support and thank you again Courage Campaign.