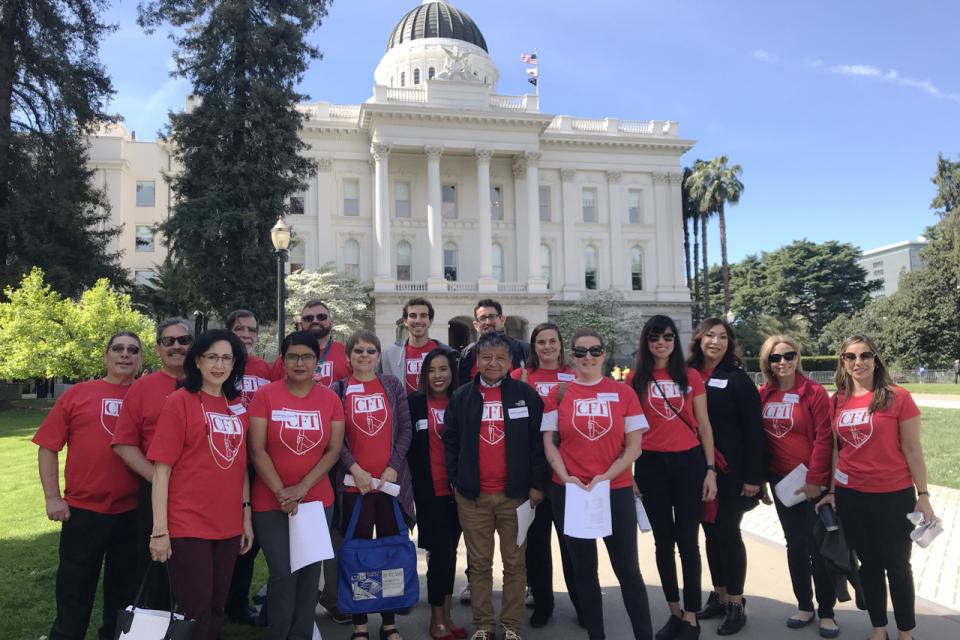 “It was invigorating as an educator to see the issues and challenges we face in the classroom being heard on a large scale. It makes me hopeful that our needs of the public school system can be addressed, heard, and then acted upon by our legislators.”
— Rachel Smith, ABC Federation of Teachers

“The laws governing charters in California are like the wild west. With no real accountability to local school communities, charter schools have become a burden on school district finances, facilities, and academic programs,” said Freitas from the podium. “It’s time to fix California’s broken charter school laws and put power back in the hands of our local school boards and communities.”

At one point during the press conference, charter backers started chanting loudly just outside of the event, attempting to intimidate those taking part and to disrupt the presentation. CFT members also reported being physically intimidated later in the afternoon when trying to speak in favor of the bills.

Despite these rough tactics, CFT members were successful in reaching Assembly legislators and staff throughout the day, urging them to restore local control on the issue of charter schools. The Assembly Education Committee voted to pass each of the four charter accountability bills, which now move on to the Assembly Appropriations Committee and to the full Assembly later in the spring. SB 756, which would put in place a moratorium on charter schools unless significant reforms are put in place, is making its way through the Senate and so was not discussed at the Assembly hearing.

CFT members also urged legislators to support AB 39 (Muratsuchi), a bill that would significantly raise education funding by establishing a new, higher funding target under the Local Control Funding Formula. The bill was also passed out of the Assembly Education Committee.

Like so many of the CFT members who took part in the Legislative Day of Action, Rachel Smith was impressed with what 80-strong CFT contingent accomplished on April 10. A fourth grade teacher at Carver Elementary in Cerritos and a member of the ABC Federation of Teachers, Rachel said: “It was invigorating as an educator to see the issues and challenges we face in the classroom being heard on a large scale. It makes me hopeful that our needs of the public school system can be addressed, heard, and then acted upon by our legislators.”

Assembly Bill 1505 by Assemblymembers Patrick O’Donnell and Rob Bonta would give control back to local elected school boards to decide whether a charter school is the right fit for their communities, instead of unelected officials who might be several hundred miles away. It would also allow local school boards to consider facilities, fiscal, and academic impacts on the district when considering new charter school petitions.

Assembly Bill 1506 by Assemblymember Kevin McCarty would establish a cap on the growth of charter schools, ensuring that unchecked charter growth will not destabilize another local school district.

Assembly Bill 1507 by Assemblymember Christy Smith would close a loophole in the current law that allows a charter school to operate outside of its authorizing district.

Senate Bill 756 by Senator Maria Elena Durazo would create a moratorium on charter school expansion through 2024, bringing a much-needed pause to the poorly-regulated charter school industry. The pause will go into effect unless the critical reform elements from AB 1505, 1506, and 1507 are put in place before 2020.