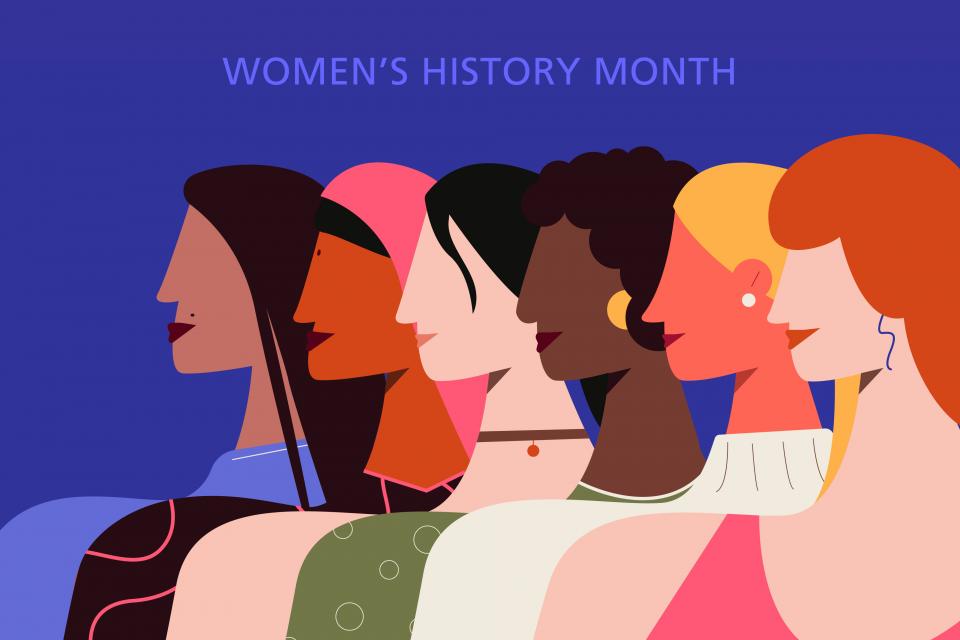 To encourage school principals to comply with Title IX regulations, a Sonoma County educational task force recommended a Women’s History Week for 1978. They chose the week of March 8 to coincide with International Women’s Day, which had been established in the early 1900s.

After celebrations had spread across the country in school districts, communities and organizations, President Jimmy Carter declared that March 8 was officially the start of National Women’s History Week. The following year, Congress passed a resolution to establish a national celebration. Six years after that, in 1987, National Women’s History Project successfully petitioned Congress to expand the event to the entire month of March.

Women’s History Month provides us an opportunity to remind ourselves of women’s contributions to our culture and society and reflect on women who have fought for change in labor, education, science, the arts, and politics. Use the CFT’s curated collection to find lesson plans for your classroom and inspiration for your union, home, and beyond.

California Women of the Gold Rush and Today’s Phenomenal Women

This site offers resources for fourth through eighth grade teachers on the suffrage movement in the United States as well as women of the Gold Rush with lesson modules, timelines, and activities. A “Phenomenal Women” series from the San Diego Tribune profiles local women including Constance Carroll, chancellor of the San Diego Community College District, who put in place tuition-free education for students with little money, Adela de la Torre, a professor of Chicano/a studies at UC Davis, and later president of San Diego State University, and Irma Gonzalez, the first Mexican-American female federal judge.

The Oakland Museum celebrates Women’s History Month by offering some information and images from female artists in its collection, some familiar and some maybe less so. There’s Miné Okubo, who was working as an artist in Oakland in 1941 when she and thousands of other Japanese American citizens were put into internment camps. While in the camp, Okubo made more than 2,000 drawings showing her daily life in charcoal, watercolor, along with pen and ink. Okubo published a graphic novel, Citizen 13660, documenting life at the camps. There’s also information about Oakland artist and political activist Favianna Rodriguez, who leads workshops and speaks about the power of art to inspire social change and Dorothea Lange, the photographer who documented the impact of the Great Depression.

Celebrating the Role of Women in American History

The Library of Congress, National Archives and Records Administration, National Endowment for the Humanities, National Gallery of Art, National Park Service, Smithsonian Institution and U.S. Holocaust Memorial Museum (phew) have joined to put together resources for teachers to use during Women’s History Month. You can talk with your classes about women codebreakers in World War II, get a primary source set on activist Rosa Parks or on women’s suffrage, or access photographs, portraits, lesson plans, and articles about how Dolores Huerta, along with fellow United Farm Workers leaders Cesar Chavez and Larry Itliong, organized for worker and civil rights.

San Francisco’s museum of science and art has created some hands-on activities that showcase women mathematicians and math teachers. Using simple materials such as scissors, yarn, tape, and some paper, the teacher-tested activities (which come with a guide to grade levels and what skills it covers) you can make a model of a virus, a cylindrical mirror, and measure pi. And the Exploratorium also offers free online science workshops for educators.

For Women’s History Month last year, the college worked with a coalition to offer short videos of women involved in the college — classified professionals, faculty members, and students. With a theme of restoring hope in challenging times (amen), the videos include thoughts from a dean of counseling whose mother grew up as a seasonal farmworker, the president of student government who was also says women can succeed in anything and need to support one another, the head women’s volleyball coach who says her players motivate her and she sees her job as serving them, whether by challenging or supporting.

AFT offers lesson plans and resources to use for Women’s History Month. They include ways to make the classroom more inclusive and to fight harassment as well as lesson plans about a range of subjects like Science and Engineering, Transgender Women’s History, and Politics and Civil Rights. You could use them to plan a lesson on Black sculptor Meta Warrick Fuller, say, or teach your students about Emma Tenayuca, who founded two international ladies’ garment workers unions, organized protests over the Border Patrol’s beating of Mexican migrants, and was a leader in the 1938 San Antonio pecan shellers strike.

LGBTQ+ Women and Gender Minorities in the Sciences

The Academy of Sciences has an exhibit to highlight LGBTQ women of color working in STEMM (science, technology, engineering, mathematics, and medicine). Dr. Lauren Esposito, curator of arachnology (that’s spiders to us) at the Academy, who organized the New Science show, says it’s not just good for future scientists to see themselves represented — it’s critical for the field to have all kinds of people to take on global challenges.

Others highlighted include a curator of invertebrate zoology at the American Museum of Natural History Dr. Jessica Ware, who brings an anti-colonialist perspective to her study of insects, and Dr. Jessica Esquivel, who says her identity as a Black, Mexican, lesbian woman makes her a great particle physicist who communicates effectively with the broader community and works for equity and justice for marginalized people.

Our Very Own CFT Labor Cards

Maybe your students could learn about workplace rights while swapping a Lucy Parsons for a Mary “Mother” Jones. These 30 flash cards illustrated by artist Jos Sances and written by CFT member Bill Morgan contain short bios of famous labor figures. Many women are included, like Ah Quon McElrath, who worked with the International Longshore and Warehouse Union, Local 142, to organize plantation workers, and writer Emma Goldman who fought against exploitation of all kinds and wrote, “I want freedom, the right to self-expression, everybody’s right to beautiful, radiant things.” Sounds pretty good.

The Zinn Education Project has short bios of some of the women who have contributed to the labor movement. There’s information about May Chen, who organized the 1982 garment workers strike in New York’s Chinatown, with 20,000 workers marching to demand higher wages and improved working conditions. There’s also Hattie Canty, known as one of the greatest strike leaders in U.S. history, a hotel maid in Las Vegas who became president of the Las Vegas Culinary Workers Union, Local 226, representing tens of thousands of workers. The site also profiles MacArthur “Genius” Award winner Ai Jen Poo, who did what many considered impossible when she organized domestic workers in New York, leading to the state Legislature passing the Domestic Workers Bill of Rights. Poo now co-directs Caring Across Generations, an advocacy organization for caregivers.

This site notes that women’s contributions have often been overlooked and that sometimes they haven’t had the resources to apply for patents. The list of women includes Sarah E. Goode, one of the first Black women to patent an invention, the fold-out bed; Ann Tsukamoto, who patented a method of isolating stem cells, which helped with the development of cancer treatments; and Stephanie Kwolek, a chemist who created Kevlar, a strong, lightweight fiber used to make bulletproof vests.

Find Books, Documentaries, and Discover Women who Made History

The Los Angeles Library has a number of resources for Women’s History Month. You can learn about Judy Heumann, a disability rights activist (featured in the award-winning and wildly entertaining 2020 documentary, Crip Camp: A Disability Revolution), listen to poems by Los Angeles Poet Laureate Lynne Thompson, or watch documentaries about women and society, such as Miss Representation on how the media represents (and doesn’t represent) women, or Ida B. Wells: A Passion For Justice, about the Black activist, journalist and suffragist who crusaded against lynching. Or see (and listen to) a documentary about women jazz musicians from the 1930s to the present, The Girls in the Band.

It being a library and all, there’s a list of books about women Nobel Prize Winners, like Mighty Be Our Powers: How Sisterhood, Prayer, and Sex Changed a Nation at War, by Leymah Gbowee, who helped organize and lead the Liberian Mass Action for Peace, a coalition of Christian and Muslim women who helped lead the nation to peace. Or you might be inspired to check out I Am Malala: The Story of the Girl Who Stood Up for Education and was Shot by the Taliban (the title tells you a lot of what you need to know), by Malala Yousafzai or In Praise of Imperfection: My Life and Work, by Rita Levi-Montalcini, who won a Nobel Prize for her work on the nervous system, in spite of the anti-Semitism she faced in Mussolini’s Italy.

GoGirlGo! How Parents Can Encourage Girls to Get Active

This site has resources for parents to support their daughters being active as a way to build confidence and have fun. There are suggestions for both younger children and teenagers on how to build in physical fitness to daily life as well as tips for changing attitudes in girls who are afraid of being teased or how think they are not athletic.

Including Women’s Vision in Wildlife Photography

Photojournalism has long had a gender imbalance, but wildlife photography particularly stands out with only about 15% of women making up its ranks. A photo contest from the California Academy of Sciences is doing its best to encourage women to get out in the field. In the last few years, the BigPicture has made sure at least half of its judging panel is made up of women and they’ve created an advisory committee to support Women in Wildlife Photography. Two conservation photographers who joined that committee took it on themselves to create a directory of female wildlife photographers and filmmakers all over the world so editors and producers can easily get in touch. “No more excuses for not being able to find us,” is the tagline.

To learn about women in the arts, try listening to SFMOMA’s excellent podcast, Raw Material, that did a “mixtape,” a collection of different podcasters offering some perspectives on the hidden histories of women artists. Could you name 10 women artists, they ask at the beginning of the series. Maybe, but it might be a struggle. This podcast is a pleasure to listen to, as you learn about people like modernist artist Georgia O’Keefe, known for her paintings of New Mexico scenery and the intimate botany of flowers; Native American Maria Tallchief, the first American prima ballerina; and American painter and printmaker Mary Cassatt, who lived most of her adult life in France and exhibited with the Impressionists.

Every month is Women’s History Month at the Young Women’s Freedom Center. Headquartered in San Francisco, and now with locations in Oakland, Santa Clara County and Los Angeles, the organization, founded in 1993 is an advocacy organization for women, trans, and gender non-conforming people, working with a population disproportionately affected by the criminal justice system. The Freedom Center focuses on advocacy, research, and coalition-building for the communities who find their young people incarcerated. The organization is using nearly its nearly 30 years of research, reports and materials to develop a standardized curriculum and a training for trainers. 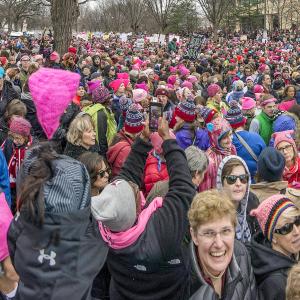 Six “Aha! moments” from the Women’s March on Washington

My flight out of SFO was delayed and I nearly missed my connecting flight. But this time it wasn’t just me running from one end of an airport to the other. It was a posse of determined women — many in pink hats with ears — a teenager, a college student, a few of us in that indeterminate age between 40 and 70, including two grandmothers. I ran ahead to make sure they’d hold the flight with one of the grandmothers right behind me. When we got to D.C., the city was teeming with marchers. You didn’t need to see a pink hat with ears to know who we were.